Posted on August 25, 2015 by mondaysatthealtar

Ten years is a long time but the memories of Hurricane Katrina and its aftermath have not faded for me. I remember watching the evening news and seeing those staggering images of people in New Orleans in the aftermath of the storm. I was overwhelmed with emotion watching people waiting on rooftops to be rescued while others made their way to the Superdome with the hope of finding loved ones, shelter, food, water and assistance. Some people never made it out of there. I will probably always remember watching people attempting to cross the bridge into Gretna and being turned away by police officers with guns drawn. Some of those people never made it off that bridge, either.

I will also remember that horrible, sick feeling I got watching the unfolding drama as day after day went by with people in need of help and help not coming quickly enough.

Then, the levees broke and it turned the city and the nation upside down.

I volunteered to be one of the staff for the newly formed National Council of Churches’ Special Commission for the Just Rebuilding of the Gulf Coast. The work we were doing to advocate for the rebuilding efforts took me to New Orleans many times. In the beginning it was eerie, like a ghost town. There was very little activity on the streets. Entire neighborhoods had been abandoned. Some of these neighborhoods are still empty. I have memories of walking through the Ninth Ward the first day the National Guard allowed access back into that area. There was that X and those numbers on the doors that indicated how many bodies had been found at a particular location and whether or not pets were found as well. There were water lines higher than you can imagine on street walls and buildings, marking the level to which the water had risen. There were abandoned cars and an abandoned boat at a gas station that had been used to help rescue people. I’ll never forget those images. It was hard not to cry…a lot. The first few times I went there it took days to shake off a deep sadness for all that had happened, for the utter devastation of it all.

But those are not the only things I remember. I also remember meeting for the first time with clergy from the area, some of whom had been impacted by the storm but who were determined to rebuild and help others rebuild. I can remember the fortitude and strength of the people willing to help their neighbors, to share their stories and to point those of us from the outside in the right direction to be helpful as well. I remember the churches rallying to help their members and one another – churches supporting churches. I remember the resilience and love of so many faith leaders (and people who professed no faith at all) determined to make a difference and to bring New Orleans back, even better and more just than before.

You see, Hurricane Katrina uncovered for us some institutional problems that have to be addressed, not just in New Orleans but in cities across this country where people are in harm’s way just because they live in poverty. Hardworking people who go to work every day. Hurricane Katrina revealed the harsh reality of the poverty that kills in America. No, it was not just people living in poverty who died but those with financial and other resources were much more likely to survive and recover more quickly than those who ended up at the Superdome, Convention Center or on buses without a clear destination.

Several months after Hurricane Katrina, I visited New Orleans and Biloxi, Miss. with a group of faith leaders who had not been there before. While they were grieved by what they saw, I felt hopeful. I could see signs of progress where there had been none. For those coming for the first time, things seemed to be desolate and in terrible shape. But, for those of us who had been there when the situation was even worse, the small signs of progress was encouraging. Restaurants open. Vendors at the airport. Hotels back in business. A car at a gas station. A person walking down the street. Sometimes it is our perspective that makes the difference between hope and despair.

I’m sure that a decade later there have been many improvements since the last time I was there. I also know there is a long way to go. But, this was no small storm and the devastation was no respecter of persons. It will no doubt take another decade or longer for the impacted areas to be fully restored. The question remains: will there be a just rebuilding of the Gulf Coast or a “just us” rebuilding? Will those who were displaced be able to return if they want to do so? Will the New Orleans of the future be more equitable than the New Orleans of bridges that could not be crossed and people who were turned back and waved away?

I shed many tears for the people of New Orleans and other parts of the Gulf Coast in the months following Hurricane Katrina. But, I was also able to rejoice as slowly but surely I witnessed progress being made. The work is still not done there but the commitment is not either. I pray that this 10-year milestone will bring renewed hope and encouragement to all those continuing to fight for those who cannot fight for themselves, to rebuild just communities and to do the hard work of restoration and equity.

May we all be as committed to end the kinds of injustice and systematic poverty that jeopardizes people’s lives every day in cities across America. Amen. 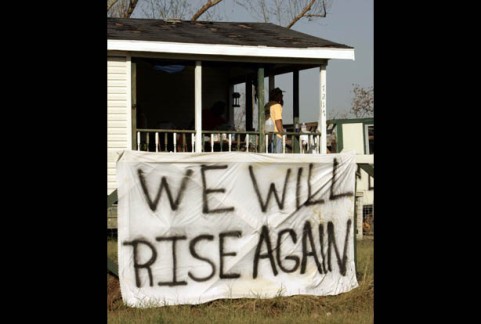 Survivors of Hurricane Katrina clean out their house after hanging a sign out front reading “We Will Rise Again” in Clermont Harbor, Mississippi September 7, 2005. Police threatened to force reluctant Hurricane Katrina survivors to leave a ruined and fetid New Orleans on Wednesday as a political storm grew over the botched response to the disaster that some say could cost $150 billion. REUTERS/Brian Snyder

2 Responses to Remembering Hurricane Katrina: From Despair to Hope